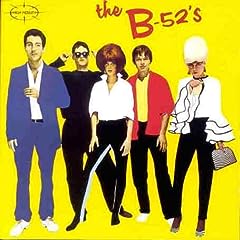 „Unbeknownst to the majority of people, a satellite manned by an Athens, GA quintet detected the next The planet’s name? Claire, which breaks the traditions of naming planets after Roman gods and goddesses. Anyway, the series of beeps heard from that planet is what starts off the first song from the B-52’s

„52 Girls“ is a cool, chugging ditty with the signature surf guitar that characterized the B-52’s.

„Dance This Mess Around“ is a mid-paced song with the amusing refrain, „Why won’t you dance with me/I’m not no Limburger“ shouted out by Katie Pierson.

The centerpiece is the 6:49 opus „Rock Lobster,“ which demonstrates the ne plus ultra of wackiness and fun for the quintet. The real surreal line that really caught me: „We were at the beach/Everybody had matching towels.“ If the B-52’s played a party by the ocean, mermaids, fish, crustaceans, cephalopods, lamellibrates of all shapes and sizes would show up to boogie. And love that swirling effect after Fred sings „Down, down.“ There are too many silly sounds and bizarre lines in this song to mention.

„Lava“ really goes into overdrive with the volcanic comparisons and similes, with references to Mauna Loa, Krakatoa, Pompeii. And here’s real trip: „My love may be as high as the highest volcano“ Volcano instead of mountain: now that I like. Oh yes, I guess just like the movie, they didn’t realize that Krakatoa is actually WEST of Java. It’s OK–not many people know that.

„There’s A Moon In The Sky (Called The Moon)“ (love that title!) is the other space song here, which might make astronomy students chuckle or make the subject fun for first-time students. If not, „you get a mouth, a mouthful of red Kryptonite.“ Ha ha! It’s a real jamming tune, what with the chugging guitar.

Lists seem to pop up in B-52’s songs. In „52 Girls“, 25 girls are listed, if you count Kate’s name sung twice, and if you count Jack as a truncated version of Jackie. So the number is 52 in reverse. OK. And what about those dances in „Dance This Mess Around“–the Shu-ga-loo, the Shy Tuna, the Camel Walk, the Hip-O-Crit, Aqua-velva, the Dirty dog, and the Escalator? Some are those have to be fictitious. Oh yes, and dig the marine life listed in „Rock Lobster.“

Silly choruses: „Shake-a bake shake shake“ and „Yeah yeah yeah yeah…“ „Scoodoobie-wop!“, „Won-ton-ton-ton rama-in-Andromeda“ Silly and fun is the key to enjoying the B-52’s, and anyone who’s been raised on sour grapes or ugly fruit should recover in no time at all.

These are the only B-52’s that will get the approval of an anti-war protester, and that’s the way it should be. Well, I’m gonna either jump in a crater or ride in a golden meteorite with a bikini whale. So see ya later! (http://www.amazon.com/review/R3H58AFWMIS5CY/ref=cm_cr_rdp_perm)