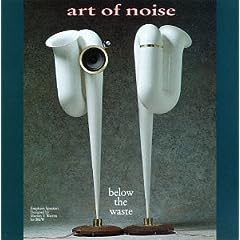 „Below the Waste is Art of Noise’s fourth full-length original album, and their last album for China Records before Anne Dudley reformed with ZTT’s Trevor Horn and Paul Morley for The Seduction of Claude Debussy (1999). The album saw them experimenting with world music, collaborating with Zulu group Mahlathini and the Mahotella Queens. The African singers provide a heavy layer of mostly non-English vocals. Many see the album as presenting two distinct halves, representing the diverging interests of the two musicians involved. One one hand, you have a few light dub tracks and a couple of harder, rock-edged tunes, both probably efforts of J.J. Jeczalik. These arrangements use sampling, long fade outs, a diverse mix of classical instruments with guitar riffs and almost industrial percussion, typical of earlier Art of Noise material. On the other hand, you have several shorter ambient interludes of melodic, orchestral pieces, most likely the work of Anne Dudley. In similarity to the preceding album release, In No Sense? Nonsense!, the album also featured versions of previously recorded themes composed for television and film, namely Robinson Crusoe (originally the theme to the 1964 television programme The Adventures of Robinson Crusoe) and James Bond Theme which was submitted, and consequently rejected by the film producers, as a potential version for the soundtrack of Licence To Kill (1989)“ (Quelle: http://en.wikipedia.org/wiki/Below_the_Waste)