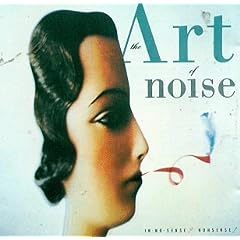 „In No Sense? Nonsense! contains some of the Art of Noise’s most compelling work. With this album, Anne Dudley and company expanded their new wave experiments to include more instrumental firepower. In addition to full rock band production (including electric guitars, drums, and synthesizers), this record makes use of brass band, orchestral, and choral music. The result is about as rich and complex as they ever got. In No Sense? Nonsense! is probably best known as the album that included their take on the theme from the ’50s cop show Dragnet, used in the 1987 film version that starred Dan Akroyd and Tom Hanks. That track is certainly the most accessible on the record, but it somehow seems a little too punchy for the primary ambient pop surroundings. It might fit better on a different album. This record is more notable for tracks like „How Rapid?“ and „Opus for Four“ that engage in fanciful genre blending. At times, the sound almost begins to anticipate later ambient dance artists like Enigma and DJ Shadow. But the Art of Noise are aptly named and consequently limited. Their artful noise collage lacks the visceral impact afforded by those later bands. In No Sense? is more often interesting than beautiful. (Evan Cater, All Music Guide) “ (http://www.artistdirect.com/nad/store/artist/album/0,,45303,00.html)