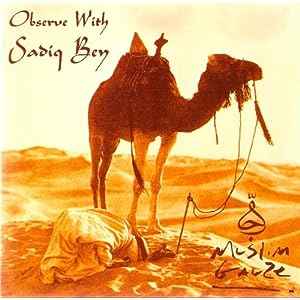 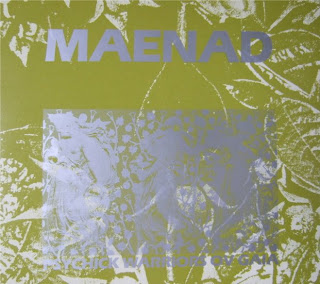 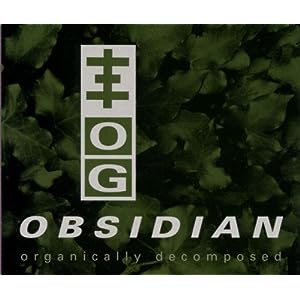 „“Hand of Fatima“ is one of 2 new ltd. edition (1000) Muslimgauze cds released in June of this year, the other being „Fakir Sind„.  „Hand of Fatima“ gives us 6 lengthy tracks that clock in at just over an hour in total.  The first three tracks are similar:  booming dub style bass line, a barrage of hand percussion, wailing vocals, marketplace sounds and dialogue  here and there, the occasional wind or string instrument or whistle.  These tracks are very beat and bass heavy, but not overdriven or overwhelming.  „Youseff..“ has a unique sound … a very interesting bass/synth loop and constant clicking sounds are used throughout as various vocal and environment sounds drift in and out of the background.  „Mustaffa“ is also heavy on percussion and features a slightly distorted wind instrument sample.  The track stops and starts several times and goes through some volume changes, dropping down to barely audible and returning with a big, overdriven bass line.  „Arms..“ is set at such a low volume that the only thing you hear most of the time is the bass line.  But, there’s also some quick and nasty outbursts of sound and short interludes of percussion.  Like most of the Muslimgauze albums with longer  tracks, „Hand of Fatima“ will either hypnotize or annoy you.  The only one here I find annoying at times is the final track.  The artwork for this release is probably the most disturbing of any Muslimgauze release I’ve managed to find to date:  pictures of fetal arms, what appears to be an old man’s arm and a few extremely deformed fetus heads all in formaldehyde.  Not the sort of thing I want to look at, but for some odd reason I also ended up with 1 of the 100 ltd edition posters released in conjunction with this cd.  I guess I’m thoroughly addicted to Muslimgauze stuff …“ (http://brainwashed.com/weddle/reviews/fatima.html)

„Galactic technoid foraging on….this 78 minute gem…a remarkably style-straddling experience. Moods can range from the celestial future-techno of Chocolate Machine to the glacial tribal hoedown of Zombie Astral with many electronic mattresses bounced on in between…it’s hardly surprising that Kirk’s music also wields such maturity and class.“ (Echoes) and „…mixed up elements of trance, tribal percussion and pure Detroit space techno into a luminous sonic pudding…’Tis a rich tapestry which Richard weaves out of rhythms old and new – and a pleasure to cavort on. [Kris Needs]“  (http://www.touchmusic.org.uk/catalogue/to21_sandoz_digital_lifeforms.html)