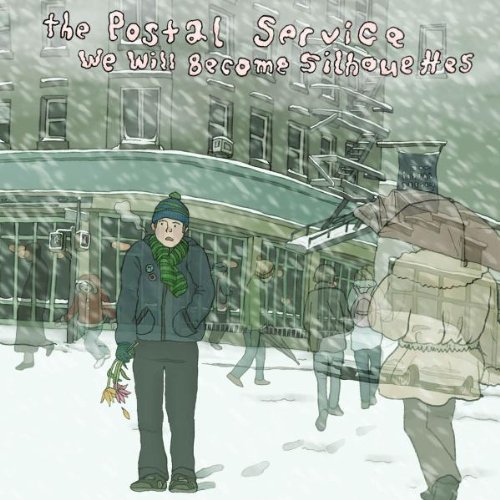 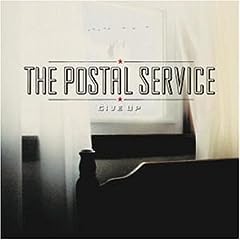 „Coming off their work on Dntel’s beautiful This Is the Dream of Evan and Chan, Jimmy Tamborello and Death Cab for Cutie’s Ben Gibbard team up again for their full-length debut as Postal Service, Give Up. Instead of covering that EP’s territory again, with this album the duo crafts a poppier, new wave-inflected sound that recalls Tamborello’s work with Figurine more than Dntel’s lovely subtlety. However, Ben Gibbard’s famously bittersweet vocals and sharp, sensitive lyrics imbue Give Up with more emotional heft than you might expect from a synth pop album, especially one by a side project from musicians as busy as Tamborello and Gibbard are. The album exploits the contrast between the cool, clean synths and Gibbard’s all-too-human voice to poignant and playful effect, particularly on Give Up’s first two tracks. „The District Sleeps Alone“ bears Gibbard’s trademark songwriting, augmented by glitchy electronics and sliced-and-diced strings, while „Such Great Heights“‚ pretty pop could easily appear on a Death Cab for Cutie album, minus a synth or two. Despite some nods to more contemporary electronic pop, Give Up’s sound is based in classic new wave and synth pop, at times resembling an indie version of New Order or the Pet Shop Boys. Songs like „Nothing Better,“ a duet that plays like an update on Human League’s „Don’t You Want Me?,“ and the video-game brightness of „Brand New Colony“ sound overtly like the ’80s brought into the present, but the tinny, preset synth and drum sounds on the entire album recall that decade. Sometimes, as on „Recycled Air“ and „We Will Become Silhouettes,“ the retro sounds become distracting, but for the most part they add to the album’s playful charm. The spooky ballad „This Place Is a Prison“ is perhaps the most modern-sounding track and the closest in sound and spirit to Gibbard and Tamborello’s Dntel work. The crunchy, distorted beats and sparkling synths recall both This Is the Dream of Evan and Chan and Björk’s recent work; indeed, this song, along with the „All Is Full of Love“ cover Death Cab included on their Stability EP, could be seen as an ongoing tribute to her. Overall, Give Up is a fun diversion for Tamborello, Gibbard, and their fans. It doesn’t scale the heights of either of their main projects, but it’s far more consistent and enjoyable than might be expected. ~ Heather Phares, All Music Guide“ (http://www.artistdirect.com/nad/store/artist/album/0,,2486400,00.html)