„Colin Vearncombe, otherwise known as Black, often writes songs that are suitable for candlelit dinners. They are usually quiet and move at a slow pace that would test the attention spans of radio programmers. However, Black’s self-titled 1991 album will leave patient listeners with much to feast on. Vearncombe has a deep, plaintive croon that sounds like a cross between the Lover Speaks‘ David Freeman and Roxy Music’s Bryan Ferry. The mellow, jazzy rhythms on Black befit his voice; Vearncombe’s vocals require moody, relaxed arrangements in order to let the emotions calmly pour out. On „Too Many Times,“ he sings about his father passing away with subtlety and palpable regret. Like „Too Many Times,“ „Feel Like Change“ and „Here It Comes Again“ unfold with a snail’s velocity; nevertheless, they are beautifully sung and stylishly composed. „Fly Up to the Moon,“ a duet between Vearncombe and Sam Brown, has a deceptively romantic chorus. The protagonist in „Fly Up to the Moon“ dreams of escaping his troubled world, but his lover refuses to join him in the track’s startling conclusion: „and if I should fly/only you, you/there’s only you/that would say goodbye.“ The refreshingly upbeat piano of „She’s My Best Friend“ might appeal to fans of Fra Lippo Lippi. There’s only song worth skipping on Black: the leaden „Learning How to Hate.“ The understated hooks on Black may not be heard on first listen; however, they become loud and clear after repeated spins.“ (http://www.mp3.com/albums/496427/reviews.html) 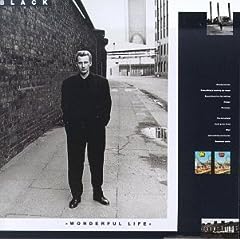