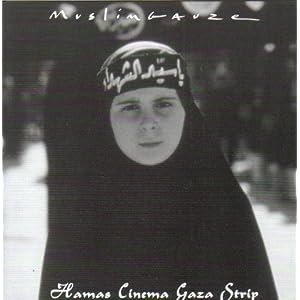 „…Hamas Cinema Gaza Strip is just one of the many posthumous Muslimgauze records to come out this year, and like all of them it was only available in extremely low quantities. It also happens to be one of the best Muslimgauze albums I’ve heard. More structured and beat-oriented than many of Jones’ recordings—without dabbling in the kind of caustic noise that he occasionally indulged—this CD is a dense and beautiful trip through Jones’ conception of the Middle East, a place he never visited but sympathized with very deeply.

Throughout the album, the drums are mixed uncharacteristically high, giving an immediacy and dominance to the rhythmic elements of this music. The title track makes the best use of this style, placing the hollow-sounding drums above squirts of Middle Eastern melodies and a stately sampled string section. Another of Jones’ favored tactics is the incorporation of voices speaking in Arabic into his music. Throughout the opening “Yasser Arafat in Tunis,” female voices drift in the spaces between the restrained guitar and lively drumming. On “Hezbollah Radio Advert” (which sounds like it could be true to its name), a guttural voice makes its case amid abrasive drum textures and bursts of rumbling noise…. (Ed Howard)“ (http://www.stylusmagazine.com/review.php?ID=711)