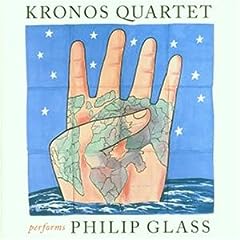 „For the Kronos Quartet, the music of today is an explosion of varied sounds, each with its own intriguing voice, some bearing messages that until recently might not have been welcome inside the concert hall.

Philip Glass writes nothing dissonant. Company seems not so much modern as neo-romantic; its drenching melancholy makes it a prime example of his current, often overtly emotional style. But his compositional method is still extraordinarily pure. The piece consists of transformations of a single phrase; the transformations begin right at the start. We hear very little -and in the first and last movements none at all— of the rhetoric we’d expect in less minimal music: introductions, say, or transitions, or the stretches of comparative relaxation that in a rigorous older form like a fugue would be called „episodes“. The four movements of this piece began as incidental music for a 1983 production of Samuel Beckett’s play Company (hence the title of the piece) by the New York experimental theater group Mabou Mines. As a unified composition they fit together remarkably well, and almost in traditional ways: the third movement, for instance, functions just as a slow movement might in Mahler or Beethoven, and the fourth is hard not to hear as a finale. (Gregory Sandow)“ (http://www.philipglass.com/music/recordings/kronos_quartet.php)