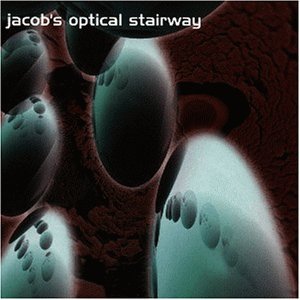 „Mark Mac and Dego, the North London duo behind Jacob’s Optical Stairway, can without any doubt be regarded as the pioneers of the junglist sound of the nineties. As 4 Hero and through their label Reinforced Records they almost single-handedly shaped the drum ’n‘ bass genre, generating a blueprint for it in 1994 in the form of their brilliant second album „Parallel Universe“.

Having emerged out of the London pirate radio/sound system scene of the late eighties, since their hardcore classic „Mr. Kirk’s Nightmare“ they have been pushing the limits of dance music and set the tone for today’s ever-growing cult of the breakbeat. Whereas on „In Rough Territory“, the debut album from 1991, hip hop and house influences were still prevalent, it was Mark and Dego’s unlikely combination of drumloops in overdrive, ambient, jazz, soul and techno that established jungle as a credible musical form. Within a loose hardcore framework, the daring duo spice up idiosyncratic grooves with vocals, guitars, house-inspired chord progressions and brass, which pandemonium of eclecticism makes them one of the few jungle artists capable of an album length recording that boasts ever changing moods, beats and ideas.

In their guise of Jacob’s Optical Stairway Mark Mac and Dego recorded a highly successful first album (released in January 1996) for R & S Records, the renowned Gent-based techno label which over the past two years seriously tightened its links with the thriving U.K. avant-junglist movement. The track „Solar Feelings“ was taken from that self-titled album and released as a single, coupled with two remixes by Claude Young and one by J. Majik, while on the album techno luminaries such as Juan Atkins (Model 500) and Josh Wink lended a hand.“ (http://randsrecords.greedbag.com/buy/jacobs-optical-stairway-0/)