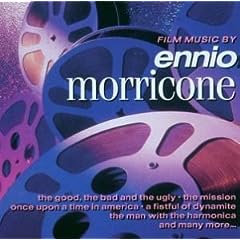 „Morricone himself conducts this collection which chronicles some of the absolute peaks in his long and prolific film scoring career. Starting with The Good, The Bad and The Ugly from 1966 and ending up with Academy Award-winning The Mission two decades later the excerpts clearly demonstrate the diversity of his output. The album includes a fistful of Sergio Leone tracks and the classic chart-topper „Chi-Mai“ (from the time it was used for the BBC’s The Life and Times of David Lloyd George). The indefatigable Morricone never ceases to reinvent himself, but there are some clear throughlines in his production all pointing towards his highest commercial success, The Mission: „La Califfa“ from 1970 seems to have provided inspiration for „Gabriel’s Oboe“ a quarter of a century later, and the pan flutes of „Cockey’s Song“(from Once Upon a Time In America) pop up again in Amazonian attire in „The Falls“. Likewise the staccato choir in The Mission echo the string arrangements of „Le Vent,Le Cri“ and „Chi Mai“. Without A Fistful of Dollars and the title track from Cinema Paradiso this collection does not feel quite complete, but with the Leone classics and the healthy helping of memorable „Mission“ melodies, this low-price taster proves a rather good buy, and should inspire listeners to check out some more Morricone. (Yngvil V.G.)“ (http://www.amazon.co.uk/Film-Music-Ennio-Morricone/dp/B000026LNJ)