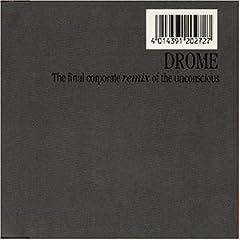 „Drome is the earlier, more techno- and dub-infused pseudonym of Nonplace Urban Field/Some More Crime member Bernd Friedmann. With his first singles and a full-length appearing on the Toxiktrakks label and more recent material released through Wigwam and Ninja Tune, Friedmann’s signature restlessness with respect to convention is clearly nascent in his Drome work, most obviously in his knack for odd combinations. Although Friedmann’s releases as Drome have thinned in recent years, the name is widely regarded in association with the development of downtempo breakbeat and trip-hop, with a sample-heavy ambient- and dub-influenced take on hip-hop-styled beats and a clear, atmospheric nod to home listening over the dancefloor. A native of Berlin, Friedmann’s commitment to accelerated mutation also earned him a spot on the Ntone sampler, Earthrise (a two-disc set released by the American Instinct label in 1995), as well as a touring partner in Uwe Schmidt, aka Atom Heart, who accompanied Friedmann on a series of live dates in Australia and Japan toward the end of ’96. Friedmann’s Nonplace Urban Field material has occupied the bulk of his time of late, with releases such as Raum Fur Notizen and Golden Star, as well as remixes for Unitone Hi-Fi, Bowery Electric, and Hab taking Drome’s genre-obliterating aesthetic deeper still into the forests of abstraction.“ (http://itunes.apple.com/de/artist/drome/id4845892)