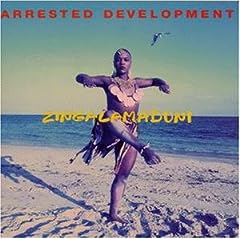 „The follow-up to Arrested Development’s hugely acclaimed debut, Zingalamaduni was something of a letdown, and not just because conscious rap’s moment in the sun was over for the time being. The record is simply less exciting, falling prey to too many aimless grooves that don’t always capture the effortless earthiness of the debut’s best moments. That’s a shame, because there are subtle progressions on the group’s signature sound. There’s more frequent and explicit use of African musical elements, especially chanting; that reflects a slightly more Afrocentric viewpoint in the lyrics (not to mention the album’s title, which is Swahili for „beehive of culture“), which tones down the sunny positivity of the debut somewhat. A few cuts are jazzier than anything on the debut, yet the overall lack of focus produces too many lackluster-to-average moments. The best tracks are a match for their counterparts on 3 Years… (save for „Tennessee“); songs like „Mr. Landlord,“ „Ache’n for Acres,“ „Praisin‘ U,“ and the catchy „In the Sunshine“ illustrate why some critics found reasons to like Zingalamaduni that weren’t purely intellectual. But overall, it failed to captivate Arrested Development’s audience the way its predecessor had. Not until the ascendance of the Fugees would another group command the level of critical and commercial respect that Arrested Development had in its prime.“ (http://www.allmusic.com/cg/amg.dll?p=amg&sql=10:difyxq9hldhe)