„If Muslimgauze needs an introduction, you haven’t had your ear to the dirt for too long. Like the sublime archaeology that adorns the record sleeve, give thanks that this set has been unearthed.

Lo-fi India Abuse (the title scrawled by Bryn Jones on the DAT master he sent to BSI) shows Muslimgauze in fresh and varied form, focused on a minimalist palette of hand drums, sine-wave bass, sick distortion, and drop-out dub delays. All the tracks feel live and hands-on; not labored over, but with real staying power nonetheless. The recording and mastering are immaculate, with devastating low end, and tablas so crisp you swear the drummer’s four feet in front of you wearing a cloaking device. Some of the tracks are reconfigurations of Systemwide songs, elements of which were torn straight off their Sirius CD. Bryn and BSI have left it to the attentive to determine which tracks are versions, and which are straight up ‚Gauze.

Side A. Antalya drops you smack in the center of the Souk, a tide of humanity surging to the whistle. Romanie Abuse and Valencia in Flames tear fucking holes in your speakers‘ mids, as obtusely looped live bass patterns keep you stumbling forward, blacking out and coming to from the deadly delays. Al Souk Dub brings you back to the market, with a bass line so subby you won’t even know it’s there unless you have 12″ or bigger woofers. Catacomb dub flanges the hats and dubs the rhythm until the dub becomes the rhythm, until the void itself is being dubbed – as dope a testament to Bryn’s compulsive genius as you’ll hear on any release that came before.

Side B. Possibly the baddest track on the disc, Dust of Saqqara drags a glowing meteorite out from under Zoser’s step pyramid, cracks it open, and slowly gets the glowing green ooze all over the place. Android Cleaver resurrects Eldridge as a loping automaton blazing like Westworld. Dogon tabla calls the Great Fish God out of the deep with sweet, aquafied keyboard trills, and Nommos‘ Afterburn sends him back to the Sirius system with rocket fuel burning hot, white, and deafeningly loud.

Brush away the sand, put your ears to the cut-glass headphones of the ancients, and leave this place behind. Now.(Ibrahim Ahmeti)“ (http://www.muslimgauze.org/press/lo-fiPress.html) 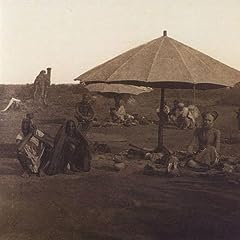 „With ‚Fedayeen‘ you get a full length album, with 8 varied tracks (7 really as one is a few seconds long). There are a couple of rapid fire drum’n’bass type rhythm loops, ‚Mustafas cassette market Marrakesh‘ featuring voices deep in the mix and ‚Aziz al Mufarr‘ has metallic phasing. ‚Abu salim Tripolk‘ is a slower drifting piece, as is ‚Murzuk‘. ‚Bharboo of Pakistan railways‘ and ‚Fraca, over and near‘ are looping pieces with irregular burst and clicks. The final track is an intriguing cut and paste of various samples from radio and records ‚Old Arab record, not on compact disc‘.“ http://www.muslimgauze.org/press/fedayeen-melt(press).html) „With this CDs, Muslimgauze was still and totally into Arabian music, but the sounds used here are more distorted and looped that on some of his later recordings. The drums, clearly acoustic, are treated and the rhythms are very repetitive. Some tracks could very well be played in clubs, since they tempo and loops would fit very well any industrial playlist (and show why Bryan Jones has collaborated with Sonar on a record). The melodic passages are in the background and less present than on „Sufiq“. They are sliced, slightly echoed, and add to the industrial touch of „Your Mines in Kabul“. The structures of the song seem slightly less Arabic than on other release, at least the repetition of rhythmic loops intertwined with breaks and very fast beats sounds more occidental to me.

Otherwise, this is a „normal“ Muslimgauze album. The atmosphere is still the same, focused entirely on Middle Eastern percussions, patterns and themas. Some strange vocals are added on some songs, for on example on the pair „Gujarati Translator“ / „Translator of Gujarati“. Finally, the third CD is a 30 minute remix of „Lahore“, fast, hypnotic and catchy.

Any Muslimgauze fans will be sent to Heaven by „Your Mines in Kabul“. All the tracks are good, and you have plenty of them to listen to. Another proof the incredible productivity of Bryn Jones, and another very enjoyable record.“ (http://www.muslimgauze.org/press/your(press).html)

„Following three CDs just released by Staalplaat and preceding an onslaught of domestic CDs comes „Lahore & Marseille“, a limited edition double compact disc single. Why make two CD singles and put them together in the same package? Indeed, why not just put all the material on one CD and be done with it? The answer is all to clear as soon as you hear the music, and Muslimgauze had the right idea when it was suggested that these songs were too powerful to put together one disc. This is music that demands that you fiddle with the CD player and go through the ordeal of opening it inserting the little silver discs one at a time. We think you’ll agree that each disc should be heard by itself. Packed in an attractive gatefold cardboard cover, this set is limited to 900 copies only. Both CDs are full sized; they are not 3 inch mini-CDs so no special adapters are needed to play them.“ (http://www.muslimgauze.org/press/lahore(press).html)

„‚Lahore‘ is a single, 17 minute piece, featuring a haunting wind solo under a long hand drum-loop which occasionally falls out of step and slightly distorts. Underpinning it all is a buzzing crackle. After 10 minutes the flute drops out and distorting and phasing the loop slightly becomes the aim of the game. A prime example of the attraction of Muslimgauze and the object of detractors. Not a huge amount happens in ‚Lahore‘ – the beat doesn’t change, there are not big events – but the subtle changes, the gradual drifts and the base certainty lead to a trancelike reverie. Boredom to some, enthralling to others. ‚Marseille‘ has three tracks – the first, longest one is in the ‚crunchy‘ vein, crackling, fast drum’n’bassish percussion with voice samples underneath, the other two tracks are more relaxed pieces, the pace slowing with each piece. Number two features a string instrument (zither? picked guitar-like instrument) solo and a chukachukachuka loop which occasionally crackles, the third combining a nice rubberybass drum with a ticktock rhythm loop and a descending string motif which appears now and then, typical talking going on in the background.“ (http://www.muslimgauze.org/press/lahore(press).html)